Following his official nomination as Republican Candidate last week, momentum for Donald Trump’s Presidential campaign is gathering.   Many of us on this side of the pond continue to shake our heads in disbelief that Trump could succeed Barak Obama to the White House.

However, the most recent Reuters/Ipsos poll has shown for the first time that Trump is catching Democratic rival Hillary Clinton.  Another poll shows him 7 points clear in the race!  So what is the Trump campaign doing so right, and what lessons can we learn for our own marketing strategy, from this apparent success story.

He’s loud, he’s brash, he offends many and …  oh yeah, he’s not a typical politician!  Also not forgetting, really important to the US public, his celebrity status as host of The Apprentice, TV analyst Katie Cartwrigh, “Trump was made to look like a demigod of business by the show and his supporters genuinely think that is how he will be if he is President. They imagine him saying ‘You’re fired’ from behind the desk in the Oval Office.”  Trump, having this distinct point of difference, has enabled him to position himself to win voters, with little chance of him crossing over into Hillary’s territory! 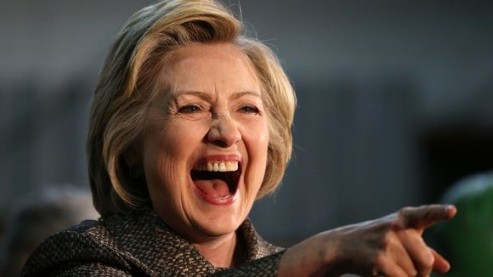 2. Resonates with the Audience.

However, it’s not enough to be well positioned, the right message is crucial and Trump clearly knows his audience and is speaking their language.  He’s delivering a message advocating change, one promising to “Make America Great Again”.  The power of the language he uses and the emphatic style in which he delivers it has gained him an unbelievable $2 billion in free media coverage.

Despite what anyone might think of his political, economic or social policy, there’s no denying Trump is expressing his real self!  It’s not hugely important that he has been rated as being truthful only 6% of the time and factually incorrect 58% of the time, according to PolitiFact.   In fact, it seems that people truly accept his flaws and forgive his regular faux-pas.  His personal brand is a triumph, one which may place him in the Oval office very soon.

4. He offers a solution to a problem.

Trump has identified the pain points of his audience; the frustrations, the past failings, the weaknesses and promises solutions which are clear, simple and tangible.  No matter that these ideas include imposing a 35% tax on Ford vehicles manufactured in Mexico are against the Free Trade Agreement and replacing corporate taxes with a 20% tax on imports would be illegal.

Any brand worth its salt however, would be crazy to lay out a range of solutions that could not be delivered…. So could this part of Donald Trump’s campaign be his downfall?However, given the success of his presidential campaign to date, Donald Trump so far has delivered the essence of an effective marketing strategy; as marketing guru Seth Godin says “Marketing is a contest for people’s attention” and Trump is winning.

How we can help?

Hi Allison Ryder here, owner of eConsult Ireland. I love the tourism sector and seeing businesses thrive. To find out more about how we can help click here...